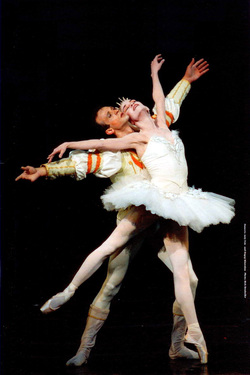 “Mr. Kharatian is an elegant dancer who can erupt with unexpected power in his leaps.”
Anna Kisselgoff, New York Times

“The surprise was how easily Hagop Kharatian, a Russian-trained dancer, adjusted to the mobility of Balanchine...” Anna Kisselgoff , New York Times

“The dancing was exquisite, among those to be praised are Hagop Kharatian...” Gia Kourlis, New York Newsday

“As often happens you never know who the true star of the program is until it’s performed. In this case it was Hagop Kharatian, a splendid dancer who had already enchanted the audience in “Le Spectre de la Rose”... “he seems to come from another world”... “tall, sleek, agile as an acrobat, powerful as lightning yet so light you can hardly be certain his feet touch the ground.” Bethe Dufresne, The Day

“Kharatian made triumphant leaps as the spirit of the rose... ideal dream lover, he moved with sinuous, sensuous grace that evoked images of Nijinski....”
Tony Angarano, Hartford Courant